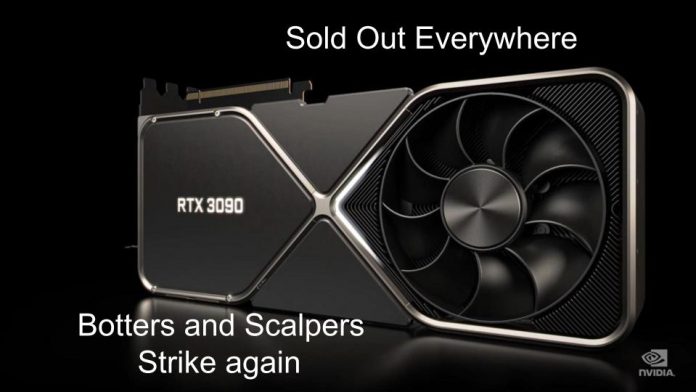 Every couple of years, big gaming companies come out with new consoles or gaming components. When these releases happen, scalpers tend to buy them all. These scalpers tend to use bots or computer software to make new accounts and order as many of these components or consoles as possible. When they do this, they tend to drive up the price by reselling them on services such as eBay or Facebook Marketplace for double or sometimes triple the value.

For example, the new 30 series graphics released by Nvidia in September of 2020 ranged from $400-$600 at retail value. On release, the 3070 graphics sold out within minutes, and the scalpers then went to eBay or Facebook in an attempt to resell them for a profit. Most of the cards listed sold on eBay for $400-$600 more than the original price. The scalpers then caused a huge demand but low supply. Most companies cannot keep up with the demand, such as Sony and Nvidia, whose restock is speculated to be more than half a year out.

Many customers are upset and want the companies such as Microsoft, Sony and Nvidia to do something about the scalpers buying all of the merchandise. Besides limiting the amount of an item someone can buy, most companies, except for Nvidia, have not attempted anything. Unfortunately for Nvidia, their plan did not sit well with their customers. They decided to bottleneck (underperform) their graphic cards when doing certain things such as Bitcoin mining, and on top of that, they decided to make mining-specific cards. Many customers and people looking for these cards were confused on why they would make mining-specific cards when they could make more normal cards since scalpers were still going to buy all of the cards. Unfortunately, nothing else has been done to protect the merchandise from scalpers.

Not all scalpers are bad, though. The only bad scalpers are the ones who drive up the price well past $1000. Some scalpers just buy merchandise to resell it to make a couple hundred bucks. With the release of the Xbox x and PS5, it was discovered that some people were reselling consoles for $600-$700 instead of the $1000-$1200 that others were trying to resell them for.

There wasn’t as much reselling or scalping for the past releases as compared to now; so, what changed? Since the pandemic started, more and more people have the opportunity to play videogames. Since more people are stuck at home, the demand for these consoles and computer parts went to an all-time high. Nvidia lowered their prices dramatically, making its graphics cards more affordable to the public. Within one series release, they lowered their cards from $1,200 to $700. This well-intended change made cards more accessible to scalpers and people who wanted to resell them, and at the same time, made it harder for the company to keep the cards in stock. Unfortunately for the gaming community, it has become harder to game and stay on top of new technology.