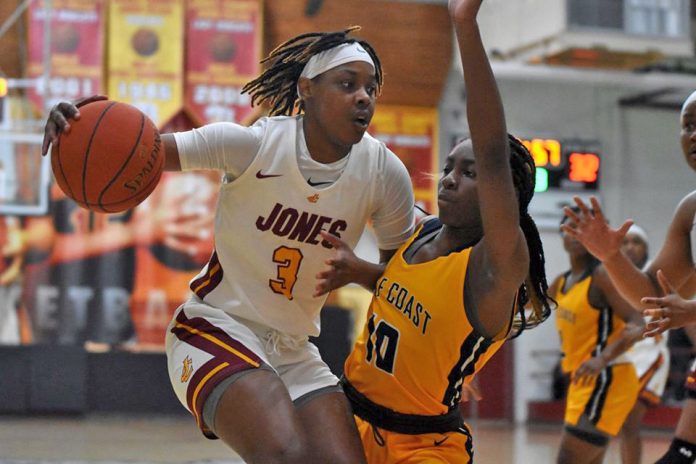 It’s November, and as football season nears its end, basketball season rapidly approaches. Since the regular season has been postponed until January, teams have been participating in preseason scrimmages.

These scrimmages give coaches the opportunity to see how their teams look, what adjustments need to be made, which line-ups are most effective, and give their freshmen experience at the collegiate level. So far, the women have played in a total of three scrimmages. The first was at home against Holmes and the second and third against Co-Lin and Southwest at Southwest.

In their first game against Holmes, the women started off slow in the first three quarters. This allowed Holmes to jump out to early leads which resulted in Jones losing the first quarter 12-16. After allowing Holmes to go on a run in the second and third quarter, Jones got some stops, came back, and tied the score 11-11at the end of the second and 12-12 at the end of third. The fourth and fifth quarters belonged to Jones as they recaptured the lead. They won the fourth 24-18 and the fifth 20-13. Since the scoreboard was erased at the end of each quarter, the unofficial score was 79-70, Jones.

Head coach Missy Bilderback spoke about how her team has progressed since returning to practice.

“I think it was a typical first scrimmage,” she said. “We have eight new faces on this year’s team, so right now we are still working to just get everyone on same page. But we really just wanted to see our team compete and give great effort. We definitely saw that from our players and feel like the other things we can easily fix… Initially, our primary goal when the players returned was to focus on their conditioning and individual development. They had such a long break with COVID. But now we have started to transition into team concepts more. This team has the ability to be very good, just got to keep working hard and growing our chemistry on and off the court.”

The outcome for neither of the scrimmages played at Southwest were reported but Bilderback gave her input on the team’s performance.

“We felt good about the scrimmages at Southwest.  I thought overall we were better in half-court offense and made some improvements there,” Bilderback said.

As for men’s basketball, their first two performances proved to be rather dominate. With a 104-48 win against Southeastern Baptist and a 101-64 win over Co-Lin, the Bobcats seemed to be impressive. On October 20, Jones played their first scrimmage game at home against Southeastern Baptist, and the Bobcats jumped out and took control early in the game. Their offense was potent, and their defense was just as effective as they only allowed 18 in the first half of play. Southeastern heated up in the second half and scored 30 points, but Jones continued to keep up their scoring production and got key stops to help cushion their lead and win 101-64.

Jones played their second scrimmage on November 4, hosting their conference opponent Co-Lin. At the beginning of the game, both teams came out confident and had good offensive possessions, with both teams going back and forth for the first few minutes. About midway through the first half, Jones turned up their defensive intensity and increased their lead to double-digits going into halftime. The second half looked like the first for Jones as they continued to enforce their will on Co-Lin defensively and offensively. The final score was 101-68, Jones.

Men’s Assistant coach Kelvin Nixon spoke about how the team performed and the improvements that they have seen.

“We were impressed by the high level of competition,” said Nixon. “We like how we competed, played together, shared the ball, how our bench was engaged and the team’s overall approach to the games. The majority of our freshmen acclimated well on their first collegiate game and our sophomores played well also. We have a few freshmen and sophomores that need to improve, but once we get the other guys rolling, I think the future is bright for us.

“They have made a tremendous jump since day one, from listening to doing exactly what we ask them to do daily. Their approach to practice, their competitive edge and ability to receive coaching has improved every day, and we look forward to the season,” Nixon said.

The men’s team will play another scrimmage, this time against Royal Ambassadors, January 14 at Jones.