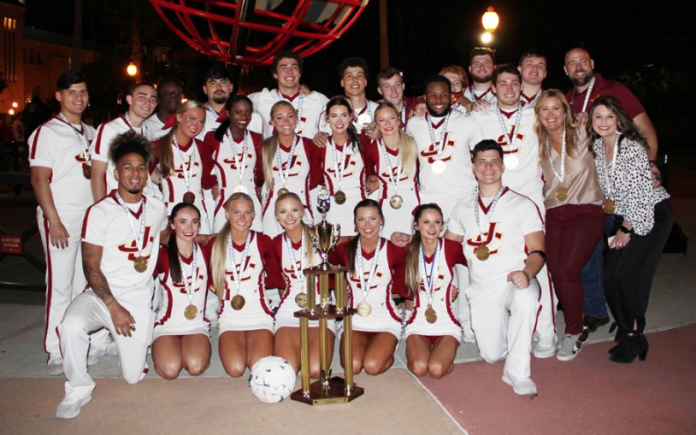 With another win, the Jones College cheer squad have shown the nation, once again, that hard work pays off.

This past January, the Jones College cheerleading squad of 20 coached by Kayla Hankins, traveled to Disney World in Orlando, Florida and competed in the Universal Cheerleaders Association National Championship. For the second year in a row, Jones brought home the gold medal in the Open Co-ed Division.

The sophomores on the squad got the chance to experience winning a national title for two years in a row.

“It’s harder to stay on top than it is to get on top,” Potter said. “Winning the first one put a target on our back and made opposing teams more determined than ever. We knew we had to go down there and give the judges no option but to name us the winners.”

Although Potter and her teammates felt an immense amount of pressure on them, she said her love for competing makes it all worth it.

“The best part of competing is when the crowd gets involved. Right before I go on, my nerves are very high, but the second I step out on the mat I get so excited. The lights, the crowd screaming for you, the big arena and stage is so breathtaking,” she said.

Potter said when Jones College was announced the National Champions, it was a feeling she could not even describe.

“All I knew to do was to give all the glory to God because none of it would have been possible without Him,” she said. “I was overwhelmed with joy and thanksgiving! I was beyond proud of my team and took every moment in celebrating with them.”

The sophomore cheerleaders’ season has come to an end with a strong finish. Now the freshman cheerleaders are stepping up and preparing for Nationals.

Hope Weathersby, freshman, has high hopes for next season and gives credit to her fellow cheerleaders.

“Seeing the sophomores after that win step up and set an example made all of us feel the pressure of wanting that feeling of winning, and also knowing that we are capable,” Weathersby said.

Weathersby experienced first hand all the hard work that was put into bringing the National Championship home and she said she hopes to do it again next year.

Jones College will hold cheer tryouts May 1, 2022. For more information check out jcbobcats.com.

Sidelined player steps up the plate to succeed in his sport

Murray Hutchinson’s love for baseball led him to Jones and right back again despite a pandemic and an abnormal start to his college career. For...
Read more
Sports

From August until now, Jones athletics has accomplished and successfully earned many regional, state and national titles. Most of the teams held a steady...
Read more
Sports

This past weekend, the Jones College men and women's tennis teams competed in the NJCAA Region 23 Championship. The tournament was hosted by Jones...
Read more