Home Sports Binding happy to be at Jones
Sports 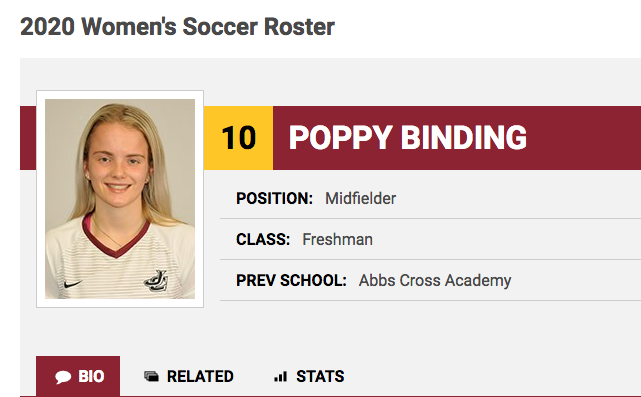 During the fall semester, COVID-19 prevented international players from attending American colleges. Not being a part of the practice season with their teammates from the beginning adds an extra challenge for those players from overseas.

Soccer player Poppy Binding of Essex, England said dealing with the change of life due to COVID-19 has been hard.

“As an adventurous person and a person who enjoys being outdoors and socializing, I personally have found COVID quite hard as I was unable to do all of the things that I enjoyed,” she said.

Binding has been playing soccer since she was about 4 years old, and ever since then she feels like soccer has been her calling. Playing collegiate soccer has been her dream since she was just a little girl, and she said she was excited when she was offered the opportunity to play at Jones. She said the fall semester was hard with all her classes online, but now that she’s at Jones, she feels it’s a better experience.

“I am excited to finally be able to be an independent person,” she said. “Also being able to live on my own, alongside meeting my teammates, playing top level football and getting a decent level of education.”

According to Binding, soccer isn’t just a sport. It is a way to be free and let go of all the negative energy that has been built up.

“I fell in love with soccer when I was about 14 years old,” Binding said. “I realized I fell in love with it when I had a lot going on and wasn’t feeling my greatest, but when I stepped onto the football pitch all of my worries went away. It helped me forget about all the negative thoughts I had.”

Over the years, Binding has had the opportunity to play soccer with a diverse group of people.

“Soccer has helped me meet different people from all types of backgrounds and understand them,” she said. “This has helped me previously in different soccer teams because it has helped the team to bond on different levels and accomplish more together.”

She said the time COVID-19 has taken away from her life made her even more excited to get to the states to be able to enjoy the new atmosphere and be around all her teammates and live a life she’s never had before. Even though it has been a struggle, she knows it is worth it in the end knowing she got to live across the world.