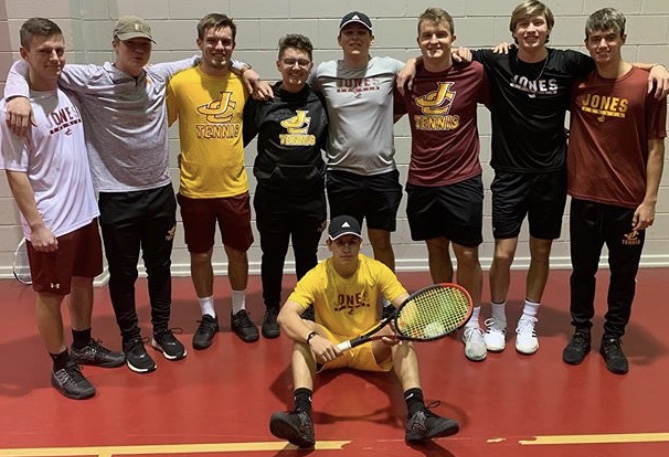 Unless you have been living in the desert the past month like Jared Leto, you likely know that there is a pandemic outside our front doors. Because of this all schools and most businesses have been shut down. This also means, with the schools, all sports left with them. Even though it is a necessary action to help flatten the curve there are still plenty of heartbroken athletes who won’t get to finish their seasons and accomplish the goals they wished to achieve when they started.

​Take the Jones men’s tennis team for example. A group of 10 guys started working the summer before they even started school with one goal in mind: to win a state championship. They worked hard throughout the fall and finished the fall with an undefeated record. Then the season came in late January and all the hard work started to pay off. Win after win came, and soon they were the top team in the state and also nationally ranked. Never losing a match in conference, they were clear-cut favorites to win it all. That was the case until they had to cease play with every other sport due to COVID-19.

“I was very upset that the season had to be cut short,” said sophomore Jacob Johnson. “We had a very talented team, and we loved competing with each other. I won’t be able to return next season, but I know my guys will get the job done.”

To help with this unfortunate circumstance, MACJC ruled that every player affected by this is given an extra year of eligibility. However, many players did not find this very helpful as they are at a junior college and still have two more years left of their degree, and they cannot afford to take a year off of their degree plan just to play a sport. Johnson cited all these reasons as to why he will not be returning next year. ​

Johnson was not the only sophomore left heartbroken as the men’s side had another in James McWilliams. McWilliams also elected to not return as he pursues his nursing degree. Among the disappointed was head Coach Brooks Buffington.

Buffington summed all of this best with, “I was very sad to see our season come to an end so abruptly and unexpectedly. I am even sadder for my players who had put in so much work on the court and for our sophomores who contributed so much of their time and energy into Jones tennis to have it end like that. It had been a great season for the Bobcats on both sides. Both the men and women were undefeated in conference play and were on target for conference and regional championships. The men were 11-2 and the women 12-0. The sophomore women leave making school, conference and regional history with a record of 30-1 and win percentage of .967 over their two years at Jones. I am very proud of this year’s players for their work ethic, mental toughness and support in one another on and off the court. While it was cut short, it was a great year, and I cannot say enough good things about these players.”